Unknown Caller is the 5th episode of the third season of The Handmaid's Tale.

June and Serena grapple with a new revelation about Nichole, leading to an incident that will have far-reaching ramifications.

June shares the confirmation with her fellow Handmaids at the supermarket that Nichole is safe, and with her husband Luke. While most of them quietly congratulate her, Ofmatthew on the other hand, tells June that she’s praying only for Luke to return Nichole to her "rightful home," Gilead.

Commander Lawrence refuses to help June find out whether Luke is in imminent danger. He states, "We’re all in danger".

Fred Waterford invites Serena into the meeting of the Council where the Commanders are discussing how to get Nichole back. They tell her what they know about Luke and report from Nichole’s medical records that they’ve somehow been able to access, promising to bring Nichole home. When Serena is alone with Fred, she confesses she just wants to be with Nichole.

The Waterfords show up at the Lawrence household and ask an initially reluctant June to call Luke and ask him to agree to a short visit with Nichole in Canada. Only when June learns it is essentially Serena's personal request to meet Nichole, she eventually agrees, pointing out she wants Serena to owe her.

With the Waterfords and Commander Lawrence looking on, June phones her husband. While walking on a bridge in the rain, Luke answers a call from an "Unknown Caller". June reassures him that she and Hannah are both OK. She tells him to bring Nichole to meet the Waterfords at the Toronto airport the next day. Luke agrees to see "not him, just her", meaning Serena. The call cuts off as June is telling him she loves him. After the call, Luke stays outside, crying in the rain.

Mrs. Lawrence later remarks to June in a private conversation that is was important that “the love came through” — like it did when Joseph wooed her via mixtape in college. She also mentions that she’s still got all of these tapes in the basement. June finds the tapes and slides one into the cassette player, listening to the music.

At her parents’ house, Serena gathers photos of her as a child and a necklace bearing a Biblical verse. She just has enough time to slip a covert package from Rita into her bag before Fred shows up to say it is time to catch the flight. When he brings her to the cargo plane, he assigns her a Guardian named Jeremiah to accompany her. In Toronto, Mark Tuello meets her on the runway, prompting Serena to dismiss Jeremiah before preparing to see Nichole.

Tuello informs her that the meeting is going to take place in public at Luke's request. He adds that he brought some clothes for her to change into because, “We want you to blend in.” After Serena changes, Mark leads her to the departure area of the terminal to meet Luke.

A wary Luke won’t shake Serena's hand when she extends it to him, cradling a sleeping Nichole to his chest. Serena thanks him for agreeing to the meeting, but he makes it clear that he is only there because June asked for the meeting. Serena promises that June is safe and gives him the name of June’s new Commander. Luke asks Serena what she wants out of her visit in Canada. Serena says she just wanted to see her daughter. Luke answers that Nichole is not her daughter. She points out that Nichole is not his daughter either. He refuses to promise Serena that he will tell Nichole about her, harshly informing her Serena will never "be anything to her" since the girl's story is "how brave her mother was for getting her here". A crying Serena points out it was her decision to let Nichole go because both she and June wanted a better life for the child. She also adds that she "protected" June. Luke pockets the case with the necklace that Serena offers him. Luke allows her to hold the baby, who’s woken up, before they part.

On the way back, Tuello renews his offer for “Treason and coconuts” to a crying Serena. She rejects his offer and barely makes it into the changing room before she has a sobbing breakdown.

Back on the plane, we see that there is a satellite phone in Serena’s purse, along with a note that reads, "If you need me.” Back in Gilead she tells Fred that Nichole is perfect and “now it’s over,” to which he replies, “It doesn’t have to be.”

At the supermarket, an upset Ofmatthew informs June that she is pregnant again. June suggests that her commander must be pleased, but Ofmatthew says that she has not told him yet because of everyone's concern about baby Nichole. She then tells June that she is glad her daughter is safe and that she really believes everything is going to be okay. Suddenly, some Eyes show up at the supermarket and load June into the back of a van without telling her where they are going.

In Canada, Luke pops a tape into a Walkman, listening to the opening bars of “You Make Me Feel Like Dancing.” But after a few moments, June’s voice cuts in. In a flashback to earlier in the episode, we see her in the basement, recording messages to her husband on Commander Lawrence's old mixtapes. Crying, June tells Luke that she is ashamed to tell him about Nichole's journey into the world. She says that she had to build what life she could in Gilead and that Luke also deserves to have a life and love. She lets Luke know that Nichole's real name is Holly, her biological father is Nick, and that he helped her survive. She promises her husband that she is trying to get to Hannah back and that she loves him.

The van in which June had been taken at the supermarket arrives at destination. Aunt Lydia is there when the door opens. She gets June dressed in a new red gown, then deposits her on a soundstage. Fred and Serena are there, too; the set is dressed to look like they are in their living room. Aunt Lydia reminds June that there will be consequences if she tries anything subversive. TV cameras turn on and start rolling.

In Canada, Moira runs home to tell Luke he’s got to turn on the TV. When he does, he sees the Waterfords telling the world that they are a “family in mourning” who just want the Canadian government to return their daughter to Gilead. Back on the set, the camera zeroes in on June’s face, her expression one of pure rage. 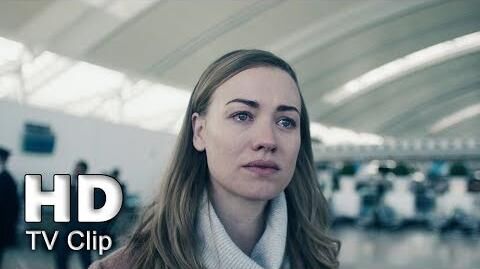 Retrieved from "https://the-handmaids-tale.fandom.com/wiki/Unknown_Caller?oldid=20146"
Community content is available under CC-BY-SA unless otherwise noted.