Unfit is the 8th episode of the third season of The Handmaid's Tale.

June and the rest of the Handmaids shun Ofmatthew, and both are pushed to their limits at the hands of Aunt Lydia. Aunt Lydia reflects on her life and relationships before the rise of Gilead.

(Relationships/Ofmatthew and Ofjoseph)
In a voiceover, we learn that Frances was a sales manager for a theatrical supply company who tutored kids after school. The Handmaids attend Ofandy's birth at the Allston household. It's revealed that the actions of Ofmatthew have made her persona non grata, and she is ostracized by the other Handmaids.

When Ofandy’s labor stalls, though, Aunt Lydia takes them to the Red Center, where she puts June in the center of a shame-circle, blaming her for her "responsibility" in Frances' execution. After being shamed, June testifies that Ofmatthew does not want her baby. Aunt Lydia puts Ofmatthew in the center of the shame-circle for her doubts in her pregnancy. She cracks, crying while the other Handmaids point at her for being calling her a "cry baby". As they leave the Red Center, Aunt Lydia blesses June for sharing what she knew about Ofmatthew.

At the Lawrence household, June asks Commander Lawrence if he learned anything about Hannah or the the MacKenzies and where they could be. He gruffly tells June he does not know anything about where they are, and tells her to not ask him again.

That night, Ofandy’s labor begins again. While Ofandy is giving birth, Mrs. Allston acts out the process of labor behind her, accompanied by the other wives. When Ofandy's child is stillborn, Mrs. Allston flies into a fit of rage and grief for "her daughter," being comforted by the other Wives, while the Handmaids circle Ofandy with sympathy to embrace her. June later realizes that she was relieved to see that the little girl died.

At home, Commander Lawrence asks June if the baby was a girl or a boy, as Eleanor Lawrence would like to know. June answers only by saying "dead". He then asks June to spend time with his wife, playing cards or something, since she is "good with her" and "good for her". She gruffly blames the world that he built to be destroying his wife, adding by keeping her "hostage" instead of taking her out of Gilead, he is factually killing her.

Ofmatthew greets June for a routine trip to Loaves and Fishes. When they arrive, Aunt Lydia informs June that she is to be reassigned to another household. In the background, we see Ofmatthew begin to tense, holding a can of lobster meat. She then begins to bludgeon Janine with the can, drawing the attention of Aunt Lydia and the nearby Guardians. When one approaches, Ofmatthew strikes him with a glass jar, slicing his neck with a shard. She draws his pistol, pointing it around the market before stopping at a smiling June and then Aunt Lydia. June gives her a glance and a small nod, signaling Ofmatthew to fire at her, but Ofmatthew hesitates and then points the gun at a terrified Lydia. Just then Ofmatthew, revealed to be Natalie by Aunt Lydia, is struck through the shoulder, the bullet protruding out her chest. Two Guardians then drag her body out the market while June, Lydia, and two praying Econowives stare motionless.

Aunt Lydia is an elementary school teacher, known as Miss Clements to her fourth-grade class. She is a rather religious woman, and often quotes the Bible. She is concerned about the well-being of her students, especially Ryan, whose mother Noelle often just gives snacks and fast food for lunch and arrives very late to pick him up. One day, Lydia invites Noelle and Ryan over to her house, where they enjoy Lydia's "famous" chili for dinner instead of going to McDonald's. Lydia tries to sympathize with Noelle, though seemingly concerned about her use of profanity around Ryan. She discovers that Noelle works as a waitress and is often harassed by her male customers. She says that she was late picking her son up because she'd deliberately spilled a drink on a customer and was being reprimanded by her boss after her shift. Lydia is sympathetic and offers gentle advice.

Lydia establishes a close relationship with Ryan and Noelle, inviting them around for Christmas. She gives Ryan a book as a present, and receives a make-up case from the family. Noelle, who believes that Lydia needs to find romance again, helps her to apply make-up. Lydia mentions that she used to practice family law. She was married, but things didn't work out with her husband, and they separated. Noelle speaks to Lydia about her dating life, revealing she's pursuing a married man with two children. Lydia remains tight-lipped about the news and lets Noelle continue.

At New Year's Eve, Lydia goes out to a bar, where she meets Jim Thorne, a colleague from school. They share some drinks and snacks, saying grace before they enjoy their food, and then perform karaoke together. The two make out, and when Lydia tries to have sex with Jim, he refuses, claiming it's too soon since his wife's death three years past. An ashamed and embarrassed Lydia smashes her mirror, crying to herself.

Lydia decides to report Noelle to the authorities, citing Ryan's unhealthy diet and his unwashed clothes. She also voices her disapproval over Noelle's dating life, and the fact that she is not religious. It is decided that Ryan is to be given to foster care. Lydia is confronted by an enraged Noelle who has to be escorted off school property by security. Jim watches on, disgusted at Lydia's actions. 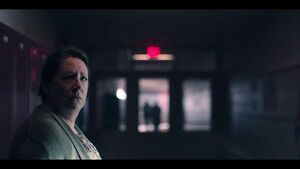 Retrieved from "https://the-handmaids-tale.fandom.com/wiki/Unfit?oldid=18044"
Community content is available under CC-BY-SA unless otherwise noted.