“
They figure you've got three years maximum.
”
— Moira to the "life" expectancy in the Colonies. [1]

The inside of what was once the midwestern and southwestern United States. Areas located at the Mexican border such as Texas and the Pacific US are under rebel territory.

The Colonies are areas of North America that have been contaminated by pollution and radioactive waste[2]. Gilead, using the system devised by Commander Joseph Lawrence, often sends women convicted of various crimes, known as Unwomen, to the Colonies, to help clear them up as punishment. A quarter of the prisoners in the Colonies is male[3].

The prisoners there wear gray clothing. The Colonies are known to have horrific living conditions, with prisoners or Unpeople sent there being used as slave labor. Those sent to the Colonies often die quickly from sickness brought on by the pollution and poor living conditions, and from malnutrition and over-exertion, with most dying after three years. Being sent to the Colonies is regarded by many as a fate worse than death, and the mere mention of them can instill great dread in the characters. It may be the case, but others may say the reverse.

The Colonies are watched and policed by Guardians, though the Aunts primarily act as overseers and slave drivers.

Former Handmaids in the Colonies Edit

Some women who were convicted of serious crimes, such as being an intellectual, or a gender traitor, but were still fertile, willingly chose to become Handmaids over being sent to the Colonies. It is mentioned that Handmaids that fail to conceive are eventually declared Unwomen and sent off to the Colonies, leading many Handmaids to take risky measures in an effort to get pregnant and be spared such a fate[4].

Notably, after being shown a video of the Colonies by Aunt Lydia, the once-rebellious and outspoken Moira Strand chooses to become a prostitute at Jezebel's rather than be sent to the Colonies. She notes that a dress code is enforced in which all laborers are made to wear gray uniforms. She theorizes that this is done for the purpose of humiliation. Prisoners who fail and or refuse to do their tasks and or follow harsh orders from the Aunts and Guardians are severely punished, and if they continue their insubordination, they are executed[3].

Other Causes for Deportation Edit

Homosexual men can be sent to the Colonies ("gender treachery")[3].

In the the Hulu adaptation of The Handmaid's Tale, a Wife named Mrs. O'Conner is sentenced to penal radioactive labor in the Colonies for adultery[5]. 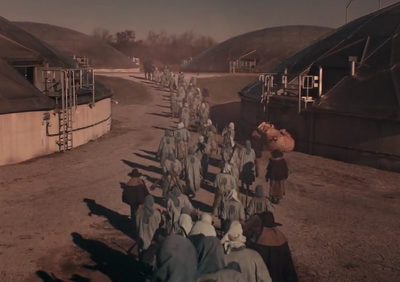 It is mentioned in the Epilogue that while most are sent to the horrific areas, if one were lucky, they could be sent to do less hazardous tasks, such as picking cotton or harvesting 100% self-sufficient food. It is unsure if this is actually true in the TV series.

Retrieved from "https://the-handmaids-tale.fandom.com/wiki/The_Colonies?oldid=19067"
Community content is available under CC-BY-SA unless otherwise noted.