Offred #1 is a minor but influential character in The Handmaid's Tale. She was a Handmaid assigned to Commander Waterford prior to Offred's (the main protagonist's) arrival at the house. She does not physically appear, due to having committed suicide shortly before the main events of the novel, but is mentioned on several occasions. She is also mentioned in the television adaption.

In the novel Edit

Very little is known about this woman. Presumably, she was rounded up and sent to the Rachel and Leah Center to be indoctrinated when Gilead came to power and was eventually assigned to the household of Commander Fred and Serena Joy. Given she later killed herself, she may have been suffering from depression due to her dire circumstances and loss of freedom. It can be assumed she was the one who carved the pseudo-Latin phrase "Nolite te bastardes carborundorum", which roughly translates into "Don't let the bastards grind you down" on the floor of her wardrobe for any Handmaids who should come after her. It is revealed that this Offred, like her successor, was coerced into an emotional affair with the Commander and that Serena was infuriated when she found out. Shortly after, the Handmaid hanged herself from the chandelier in her room, with her body being discovered by Cora, one of the two Marthas inside the house. It is hinted that, besides finding her oppressive life unbearable, this Offred also feared what Serena would do to her in revenge for the affair, and so she committed suicide to spare herself from the very real possibility of a slow and humiliating public execution, being mercilessly tortured by the Eyes, or worked to death in the Colonies.

As a result of the first Offred's suicide, the chandelier is removed from the room, and the glass in the paintings on the walls are removed as well to prevent her successor from attempting suicide as well. Offred finds the phrase her predecessor carved and the small act of rebellion brings her some comfort. When Offred asks the Commander about the first Offred, he reveals she killed herself, simply stating that "Serena found out" (about her secretly visiting him). The Commander seems somewhat saddened but doesn't take any responsibility for the woman's death and it is unclear if he actually cares about the woman, or if he was more disappointed over losing his 'lover'; either way, he clearly sees the new Offred as a replacement for her, in more ways than one. When Cora finds Offred sleeping in her wardrobe, she initially panics, dropping a tray of food and screaming, until Offred wakes and assures her she's fine, Cora apparently believing Offred had taken her own life as her predecessor did before her.

In the Hulu series Edit

Before the main storyline Edit

Rita discovers the Waterford's handmaid hanged herself in her room. Nick quickly tries to cut the rope and gets her down but only to find that she is already dead. As the body is carried away, Serena asks Fred "What did you think was going to happen?"[1]

Mentions and other evidences Edit

In the main storyline, we learn several things that may impact this character.

June asking Fred about her predecessor
(Relationships/Fred and Offred)

Similar to the novel, June finds the pseudo-Latin phrase "Nolite te bastardes carborundorum" carved in the wall of the wardrobe, which Fred (indirectly) reveals to have told to her predecessor before[2].

In "Night", Serena has discovered the dress that her husband had June wear to Jezebel's, indicating 'Offred's predecessor' also wore it with Fred to Jezebel's. In the previous episode, The Bridge, Naomi Putnam had chided Serena that "men don't change", and that started Serena's hunt for evidence of Fred's activities. 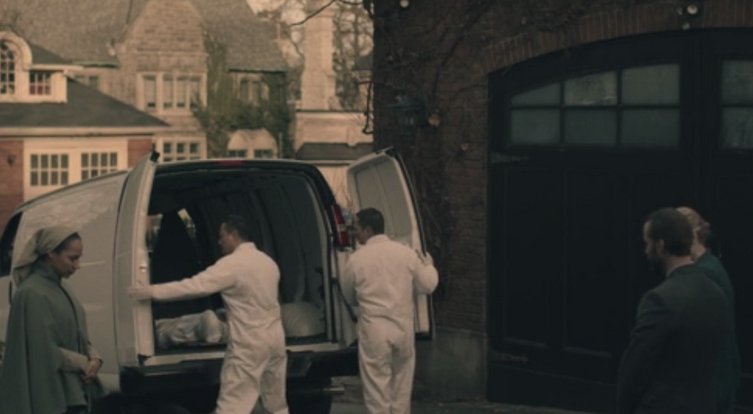 Retrieved from "https://the-handmaids-tale.fandom.com/wiki/Offred_(first)?oldid=18697"
Community content is available under CC-BY-SA unless otherwise noted.