Nichole Waterford (temporarily, by the Waterfords)

Nichole Holly Osborne, temporarily named Nichole Waterford, is the biological baby daughter of Nick Blaine and June Osborne. She was initially named Holly by her mother when giving birth (after her maternal grandmother) and  renamed Nichole by the Waterfords. June later approved the latter name [1]. Baptized as Nichole, she is currently in the custody of Luke and Moira in Canada.

In the TV series

June goes back inside an abandoned house, gets naked, and starts to push. She remembers when she gave birth to Hannah and then when Janine gave birth to baby Angela/Charlotte. She finally gives birth to her baby. She names the baby Holly in honor of her mother, the baby’s grandmother. As they're laying there, a car drives up outside[2].

Serena Joy is seen bathing Holly, or Nichole as she calls her. June, during her time as Offred, is seen using a breast pump when Aunt Lydia arrives. She commends Offred on her surviving and giving birth on her own. One of the Aunts mentions that Offred's milk is less than yesterday. Aunt Lydia says she knows this already. Apparently, Mrs. Waterford wants the milk. Aunt Lydia tells Offred that other families have made offers for her to be in their households. Commander Fred is seen setting up his office when Nick walks in. Apparently, there was a misunderstanding with some overzealous guards but he's been returned safely to work. Commander Waterford tells him opportunities are going to open up for Nick and Nick says he appreciates that. Nick hangs up a picture on the wall and it's of Serena, Fred, and the new baby.

Eden is seen holding the baby. Rita walks in with a bottle and Serena takes the baby to feed her. Rita tells Serena that they are running low on breast milk because Offred is drying up. Serena says that they can't have that. Aunt Lydia leads Offred to meet with the Commander and Nick who have brought Nichole. Offred refuses to see the baby but Aunt Lydia tells her that it'll help her produce more milk. It's true because no sooner does she say this that her breasts start to leak. Fred turns to leave by Offred offers to nurse Nichole. Fred says no but Aunt Lydia convinces him to take Offred back to the house so that she can pump there. Offred returns with Fred but this upsets Serena. She says that Offred can't touch the baby and that she pumps in the room.

Offred is using the breast pump when she hears Nichole gurgling. She walks downstairs with the milk and runs into Eden in the kitchen. Eden asks her if she agrees that a baby should be raised by two people who love each other. Offred tells her that she thinks they should grab love wherever they can. The next day, Nick is looking for Eden but can't find her. Nick tells her that their baby is so beautiful and that he wishes he could hold her. Offred says her too. Offred tells him that she wants to name her Holly after her Mom. Nick tells her it sounds right.

Commander Fred walks in telling him that guardian Isaac never showed up for his shift this morning. Nick puts two and two together and realizes that they must've run off together. Serena is dealing with a crying Nichole. She gets the idea to try and breastfeed her but of course it doesn't work.

Offred is in the kitchen helping clean the kitchen when Rita is called by Serena. Offred takes the chance to smell some of Nichole's clothes. Commander Fred walks in and asks her why Eden would runaway. Offred says she doesn't know and he asks where she was hiding when they went searching for her in the house. She says the attic and he says that she was avoiding going home with him. Offred tells him that she wanted to spend more time with Hannah and he asks how was her reunion. Offred says she was surprised to see her. Fred says that he was glad he made it happen for her. She thanks him and he asks if that's all the thanks he gets. She offers to play scrabble with him.

Offred goes downstairs and finds Nick sitting at the table. She tries to offer comfort but he just gets up and walks away. As she's going back upstairs, she spots Serena in the baby's room. She asks Serena if she's okay. The baby starts to cry and Serena surprisingly offers the baby to Offred. Offred sits and holds Nichole. She begins to breastfeed her as Serena watches.

Offred continues to go through Eden's things. She finds a Holy Bible. Offred goes to see Serena and shows her the bible and how Eden wrote notes all over it. Serena says that Eden has been hiding a multitude of sins. This upsets Offred who asks Serena how she's gonna raise Nichole. Serena Joy says that she'll be raised properly and understand the Word of God. Offred says that she won't be able to read it, and leaves, upset.

Offred is feeding Nichole when she hears a commotion outside. Rita comes in and tells her that they can get her out but that she needs to leave now. Rita tells her where to go so Offred hugs her and then leaves. Inside, Fred watches what's going on from his office. He goes and asks Rita what's going on but she says she doesn't know. Realizing something is up, he runs upstairs to check on Nichole. Nick follows him up and when Fred tells him to put together a search party Nick tells him to stay inside.

Serena spots Offred with Nichole and tries to stop them. Offred tries to convince Serena to let them go. Serena asks to hold the baby one last time, and Offred lets her. Serena hands the baby back and watches as they leave. Offred goes from Martha to Martha as they guide her out of Gilead. They lead her to the train tracks where she waits. She remembers when she sang to Hannah. She shows the picture of Hannah to Holly and tells her that maybe she'll meet her one day. That she is going to meet her one day.

June then sees a car flashing its headlights. She comes closer and sees Emily talking with Commander Lawrence. They embrace but Emily asks what is happening, Lawrence remarking that he's getting into deep trouble for what he's doing. June tells Emily that she's getting out of Gilead as a truck carrying two Guardians arrives. June helps Emily into the truck as Commander Lawrence drives away, then gives her the baby, telling Emily to call it Nichole and say that she loves her. June shuts the door and the truck drives away, Emily screaming her name. She pulls the hood of her cape over her head and with a determined look on her face, walks away into the darkness.

As drones circle through the night sky, Emily continues her journey on foot with Nichole in her arms trying to keep her quiet. She ducks behind bridges and goes low to the ground at various points to evade them, and as she wades through the river, it swallows her up and takes her downstream. However, she manages to get out of the water and collapses to the ground, exhausted. She is spotted by two Canadian police officers who offer her a blanket and asks if she wished to seek asylum, to which Emily says yes.

Upon arrival at hospital, the police officers lead Emily through a hospital corridor. Emily meets Dr. Chung, who welcomes her and promises that she will take care of her and the baby. Emily accepts the treatment, and as they continue down the corridor the doctors and nurses applaud her bravery.

Serena is sitting at her vanity putting antiseptic on her severed finger when Fred comes into the room. He tells her that he's on his way to the office and is working on setting up an investigation into Nichole's kidnapping.

In Little America, Luke rushes to the post office with Moira hot on her heels. He receives an envelope, inside is a picture of Hannah. Luke is relieved that she is safe. Emily appears behind him with Nichole, telling him his wife (June) saved her life.

June is punished by scrubbing floors in the Red Center, the soles of her feet battered. A Handmaid with a bucket lets her know that Emily and Nichole made it safely to Canada, giving her some hope.

In Canada, Baby Nichole is now living with Luke, Moira and Erin.

At the front of a congregation in Gilead, the Commander who’s leading the proceedings brings up Nichole, whom he says was taken "by an unrepentant sinner." He asks those assembled to pray for her safety.

Luke is at a Canadian protest showing solidarity with Chicago, and he’s wearing Nichole in a carrier. Luke and Moira make arrangements to have Nichole baptized because "this little one should be absolved of their sins", as Luke points out.

The Waterfords ask June to make a call to Luke, in exchange for a favor. June asks Luke to let the Waterfords say an in person goodbye to Nichole at the Toronto airport. Luke agrees to only meet Serena at the airport.

Serena comes and she comments on how big Nichole has become. She gives her a gift and asks Luke to tell her about her story and her "mother" when she's older. Serena holds Nichole and tears up while saying goodbye.

Serena leaves and Nichole is left with Luke.

June manages to smuggle a tape to Luke where she explains that Nichole was "born out of love", between her and Nick and that her real name is Holly. 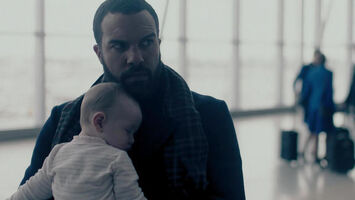 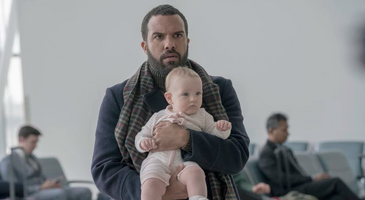 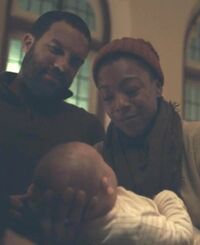 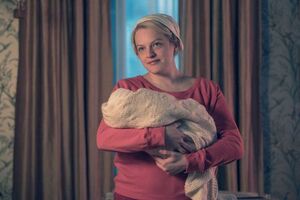 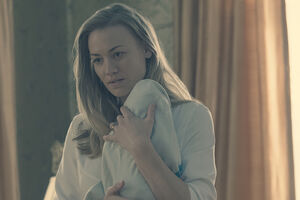 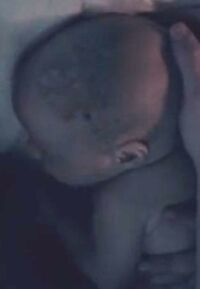 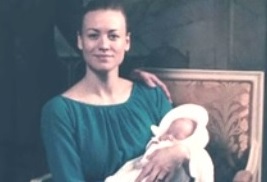 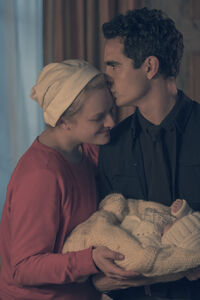 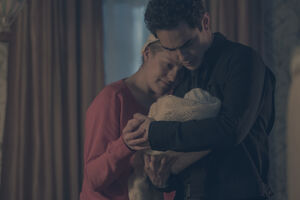 Retrieved from "https://the-handmaids-tale.fandom.com/wiki/Nichole_Osborne?oldid=14957"
Community content is available under CC-BY-SA unless otherwise noted.