Mrs. MacKenzie is a minor character in both the second and third seasons of the TV Series. She is married to Commander MacKenzie and the placement mother of June's daughter Hannah, who they renamed Agnes.

Mrs. MacKenzie is a middle aged woman, with dark brown straight hair, white skin, who is attractive. She is often seen wearing the teal dresses that all of the Commanders' wives wear.

In general, she is a soft mannered, kind, and tender hearted person. We know that she has a good relationship with Hannah. She tries to be a good mother who is not too harsh on her daughter, as some of the Commanders' wives are known to be.

She is not as compassionate when it comes to June trying to take Hannah away. She tried to be nice and lenient, but ultimately told June that enough is enough and to stay away from Hannah. She is firm and demands respect.

"Of course she told me. I'm her mother."
- Mrs. MacKenzie revealing knowledge about June's secret visit[src]

June has been left behind in the abandoned mansion where she discovers an office. Behind the desk is a photo of Hannah and her placement mother with a caught fish, and on the desk there is a picture drawn by a child, presumably Hannah. It is of the house, a dark child in the middle, a woman in green on the right, and a smaller woman in red on the left[1]

June walks into the house and startles the Martha asking "Where is she?" to which the Martha tells her that Hannah and the wife are asleep upstairs, and the Commander is away. She goes upstairs into Hannah's room, while at the same time she hears the sirens of the Guardians pulling up to the house. As June is forcibly escorted out of the house, Mrs. MacKenzie asks to speak to her. She tells June that "this has to stop," because of how damaging the interactions between Hannah and June have been. She reveals that Hannah had nightmares for weeks after the secret visit at the summer house. In response to the look on June's face, Mrs. MacKenzie says, "Of course she told me. I'm her mother." Before finally leaving the house June asks what Hannah is like. The two women share a moment of motherhood and love for Hannah, then Mrs. MacKenzie asks one more time for June to stop, saying it will only end with June getting shot in front of her daughter. June gets in the last word stating that she is Hannah's mother, creating tensions as Jonathan, the MacKenzies' Guardian drags her out the door[2]. 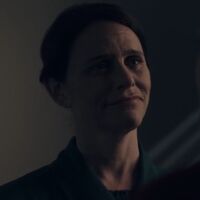 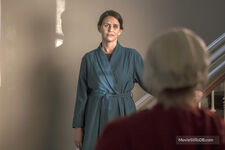 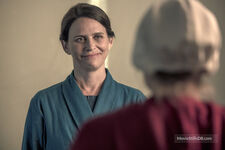 Retrieved from "https://the-handmaids-tale.fandom.com/wiki/Mrs._MacKenzie?oldid=18120"
Community content is available under CC-BY-SA unless otherwise noted.