Photo of the Winslow family

Household is the 6th episode of the third season of The Handmaid's Tale.

June accompanies the Waterfords to Washington D.C., where a powerful family offers a glimpse of the future of Gilead. June makes an important connection as she attempts to protect Nichole.

The episode opens with several Marthas and Econowives praying for the return of Nichole to Gilead. June prays for their prayers to go unanswered and for Serena to realize that Nichole is safer in Canada and for her to tell Fred to stop and for them to get hit by a truck.

June walks to her spot and greets the other Handmaids and a local Aunt, who welcome her to Washington. June is joined by Fred and Serena, who tell her that they are guests of High Commander George Winslow. June walks with Rita, who tells her that the baby is the only thing that Serena ever wanted.

George's surrogate daughter, Polly, greets her father and the guests. She is joined by Winslow’s other children, who hug their father. Commander Winslow's wife Olivia greets the guests and introduces her children to the Waterfords. Serena holds the Winslow's baby in her arms.

June leaves the living room with two Marthas, one of which is Rita, who take her up a flight of stairs to her quarters. They tell her to stay with Ofgeorge before leaving. June passes by a photo of the Winslow family, who have three sons and three daughters.

Serena and Fred settle into their room. Fred regards the Winslow family’s numerous children as a miracle. When Serena asks about the Canadians, Fred tells her that the Canadians are seeking a neutral intermediary before talking about their media campaign. Before leaving the room to do some work, he leaves their wedding ring behind for Serena. In private, Serena studies the slip of paper which Mark Tuello gave her in Toronto.

In her room, June tries to make conversation with Ofgeorge only to discover that her lips have had rings sewn to their mouths. June is horrified by the treatment forced onto her and the other DC handmaids.

The following day, June and the other handmaids form a semicircle around a statute of angel wings. Aunt Lydia notices Ofgeorge's sewn lips. Fred asks June and Serena to stand at front of the statue. When June asks how many videos he is going to do, Serena replies "as many as it takes". Nick, newly appointed as Commander, enters the chamber and speaks with Fred. He has been sent by Commander Lawrence to keep watch.

At the Winslow household, June enters the living room where the Marthas are attending to the children. June greets Serena. She tells Serena that she knows she doesn't want this. Serena is initially reluctant to talk to June. Serena is still bitter about the loss of Nichole. June says that Nichole didn't change this place and that she deserves better than Gilead. June tells Serena that she knows that to be true.

Fred asks Rita to steam his jacket. He tells Serena and June that the Canadians have asked the Swiss to conduct interviews. Fred reassures Serena that it will be a small step for Nichole. He tells June to put on a clean dress because they want to make a good impression.

June and the Waterfords travel to a large building. Having interviewed the Waterfords, the Swiss diplomat, Mattias, insists on speaking to June alone, who is now known as "Ofjoseph." Fred says that it is not appropriate in their culture. The Swiss official insists on speaking to June alone if she has no objection. June says she has no objection. Before the interview, Serena warns her not to be stupid.

The Swiss diplomat pours June a glass of water before leaving her to speak with the Swiss team. When the Swiss team asks her how she wants to be addressed, June chooses her birth name. She agrees to speak if the guards leave the room. June tells the Swiss diplomats that she is the child's mother and insists that Nichole stays in Canada. Sofia says she understands her feelings but that the situation is complicated.

June tells the diplomats that Fred is not the child's father, which the Swiss already learned from their associates in Canada who told them about an audio cassette. June asks if Nichole can stay there if that is what both of their parents want. Mattias explains that Gilead is a powerful country that Canada wants to avoid antagonizing. June asks what she can do to guarantee that Nichole remains in Canada.

Lena asks for intelligence about Gilead. June offers to put them in contact with a Commander, hinting at Nick. Mattias is doubtful this will succeed but June says that she will persuade Nick. Sofia asks if she is still in a relationship with Nick. June says it is complicated. Mattias says that if "Commander Blaine" talks with them it will help them to protect Nichole. He tells June to bring them Commander Blaine and they will have a deal. June shakes Mattias’ hand before leaving.

June smiles as she walks out of the meeting room. Commander Winslow chats with Commander Waterford while playing snooker. Regarding the Swiss mediation as a triumph, Winslow and Waterford drink a toast to the latter. Polly invites her father and Fred for a tea party.

Serena socializes with Mrs. Winslow, who says she is prepared to tolerate his vices. She tells Serena that she and her husband used to work as corporate lawyers and had no time for a family before the establishment of Gilead. Olivia also reassures Serena that she will have a family one day. Fred plays with a toy teddy bear and is about to offer Serena a toy kettle but Pauline grabs it.

The following day, June is surprised to see Lena, one of the Swiss diplomats, at the Winslow household. The diplomat tells her that they are recommending that discussions continue. June is opposed to the idea of bringing Nichole back to Gilead. June is upset that Nick Blaine won’t be part of the discussions. Lena replies that she does not know who Nick is and who he was. She says that their research indicates that he is not to be trusted. June offers to talk to Nick but she tells him that he has left for Chicago.

Fred and Serena soon arrive. Fred asks Lena if she wants to see the tape but she replies that she will wait for the finished product. June asks Serena what Nick did before he worked as their driver. Serena replies that Nick served Gilead. When June asks for details, Serena tells her that Nick served as a soldier in the Crusades and that they wouldn’t be here without him. Serena senses that June is shocked that Nick disclosed his past.

Meanwhile, Nick travels along the compartments of a train where he is saluted by Gilead soldiers. Later, Aunt Lydia inspects June in her room. June tells her she is tired. Aunt Lydia hands her a mask to put over her mouth. June asks Aunt Lydia if she wants them all to be silent. Lydia reassures her that she does not want that. Aunt Lydia admits that the trip is tiring but that she still tries to think of the good that she can do in God’s world. She says that if she can just help one soul that is enough for her. Lydia tells June that she cares about her, before hugging and comforting her. A tearful June asks Aunt Lydia to help her put the mask on her face.

Later, June visits the Lincoln Memorial where the statue of Abraham Lincoln has been beheaded. Serena approaches her from behind and seeing the mask on June's face, says that the silence is a welcome change. June tells her to return the favor and walks away but Serena tells her to stop. Serena says that after they go home they will be free of each other. June replies that she (Serena) will never be free of her (June) until both of her (June) children are safe. Serena says that is her constant prayer for Nichole. June angrily tells Serena that she trusted her to give Nichole a better life. Serena counters that she trusted June to stay with Nichole. June says she named the child Nichole to honor her and but she still will not let her go. Serena says that she loves Nichole but June says that Serena doesn’t know how to love. She tells Serena that she built this whole world of Gilead to have someone but that it did not work. June tells Serena that she is small, cold, and empty and that she will always be empty. Serena angrily responds that she should have put a ring in her mouth the day they met. June replies that she should have let her burn in the fire. Serena walks away while June touches her head against the desecrated statue of Abraham Lincoln. She stares at the statue before donning her cap and mask.

At the site of the Washington Memorial, where the obelisk has been reshaped into a giant cross, several handmaids have gathered. Fred and Serena stand before the handmaids. June joins them. Fred leads the assembled masses in prayer. June kneels after an initial delay and the other handmaids follow.

Fred tells them that children are a heritage from the Lord, likening them to arrows in the hands of a warrior. He quotes Psalm 127:3-5 before asking God to hear their state-wide televised prayer.

Nick is promoted to a Field Commander.

Serena knows details of Nick's life prior to his first encounter with her husband, which happened only after the rise of Gilead ("Jezebels"). 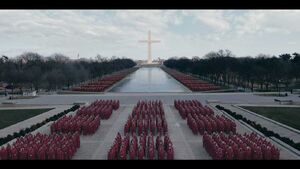 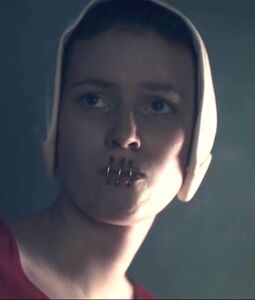 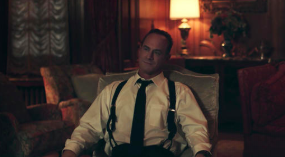 Retrieved from "https://the-handmaids-tale.fandom.com/wiki/Household?oldid=14244"
Community content is available under CC-BY-SA unless otherwise noted.