Guardians of the Faith, or simply Guardians, are a caste in Gilead that function as uniformed guards and police. They serve as the personal soldiers, bodyguards and servants of Commanders. In the Novel, they are lower ranking than Angels, though they still have some privileges over ordinary men.

In the 2017 TV Series from Hulu, the Guardians of the Faithful serve as Gilead's both soldiers and officials in law enforcement, each organized into different units which are controlled by Commanders.[1] Some Guardians serve on the front lines in Gilead's wars (as the Angel rank is not present in the TV series), while other Guardians act as police in Gilead-controlled territory. Individual Guardians are often assigned to the household of a Commander to act as chauffeurs, as well as escorts for Wives and Handmaids. They do odd-jobs around the house at times as well. Guardians are fighting American soldiers in the city of Chicago, and rebels in the Blue Hills, Massachusetts. Florida is also mentioned as a conflict zone.[2]

Guardians receive promotions and rewards like favorable postings and possibly marriage to an Econowife for good service. Guardians in the TV series have an internal hierarchy with different ranks, including commissioned officers (although these are still not considered Commanders). For example, Nick is referred to as "sir" by other Guardians.

Most Guardians wear black and gray uniforms, with an indigo jacket and/or a ballistic vest. They may wear a black knit cap or beret, but many have been seen without a headdress. When they are serving in the day-to-day household of their Commander or participating in ceremonial functions, Guardians usually wear formal attire like suits and ties. Guardians in more "tactical" gear appear at times, usually in high security zones. They wear body armor, helmets or knit caps, and sometimes a pair of ballistic goggles, bulletproof masks, and/or balaclava to cover their face.

The primary weapon of the Guardians is the ubiquitous Colt M4A1 carbine. Their primary sidearm is the Glock 17 semiautomatic pistol. When acting as riot police, they carry riot shields and batons. In a flashback sequence, Guardians were also seen using M240B and M60E4 general-purpose machine guns to open fire at protesters, as well as other civilians who were present.

Guardians, as well as the Eyes, operate almost everywhere in Gilead, and they also patrol the streets and skies in black helicopters, black GMC Yukon XLs and/or Chevrolet Suburbans each fitted with blue police-like sirens, black Humvees (which are often equipped with machine gun turrets), black Ford Transits (used mainly by the Eyes), black drones, and other black personnel trucks and equipment etc.

In the 1990 film adaption, the term "Guardian" is not mentioned at all, though Angels are in a newscast. The Gileadean soldiers in the film wear green, blue or gray uniforms with caps or berets. They are seen armed with batons and FN FAL battle rifles. Some are seen wearing riot gear.

"The Guardians aren't real soldiers. They're used for routine policing and other menial functions, digging up the Commander's Wife's garden, for instance, and they're either stupid or older or disabled or very young, apart from the ones that are Eyes incognito."[3]

In the Novel, the Guardians are usually described as wearing dark green uniforms while on duty. They wear berets with the symbol of two crossed swords above a white triangle. Guardians salute Wives and Handmaids for their service. While Angels fight on the front lines, Guardians act as police at home. They have the ability to be promoted to Angels for good service. Guardians use unspecified pistols, rifles, and submachine guns.

A Guardian on horseback stationed at the Colonies.

Two heavily armored Guardians with Offred in a train station. 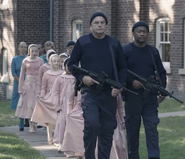 Retrieved from "https://the-handmaids-tale.fandom.com/wiki/Guardian?oldid=14130"
Community content is available under CC-BY-SA unless otherwise noted.