“
The Republic of Gilead knows no bounds. Gilead is within you.
”
— Aunt Lydia to the Handmaids in the Red Center [1].

While the actual Gileadean sphere of control remains vague in the novel, the show gives some details on Gilead's geography.

A map presented during an event for the season 2 finale revealed the full extent of the Republic of Gilead. It has largely taken control of most of what was the United States with the eastern, northeastern, and mid-western parts of the country being in Gilead hands (as evident with these particular areas being in a shade of blue on the map), but anti-Gilead/pro-US forces have retained control of the entire West Coast and the Gulf Coast including most of Texas and all of Florida. Rebel forces also control a large tract of territory along the Canadian border and northern Michigan along with an enclave in New England centering around Vermont, New Hampshire, and parts of Maine and New York state.

As shown in the map in the season two finale, it can be implied that the zones highlighted in blue are territories controlled exclusively by the Republic of Gilead. This falls in line with the limited details in the novel and the fact that most of the action in the novel took place on the East Coast and because Washington, D.C. was the first to "fall" given the attacks on Congress, the White House, and the Supreme Court.

Geographic Information from the Storyline Edit

In the TV series, a scene from the Holly episode inside the MacKenzie household shows three maps along the wall. When searching for Commander MacKenzie's car keys, maps can be found behind June on the wall which show the opening, middle and later stages of the civil war between the US and Gilead. The end result being American forces largely being pushed off the Lower 48 states.

Zones in the dark red and pink, located in both the West, Midwest, and South, are sites of active war between the military forces of the United States of America (along with rebel groups and unorganized citizen militia units loyal to the United States) and the Guardians of the Faith--the army of the Republic of Gilead. In addition to the mentioned rebel areas, there is a large American rebel stronghold located in New England with this stronghold centered in Vermont and parts of New Hampshire, Maine, and New York state. An opposition radio station (Radio Free America) airs in that region but broadcasted from Somewhere in Canada[3]. 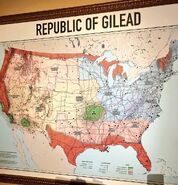 Retrieved from "https://the-handmaids-tale.fandom.com/wiki/Geography_of_Gilead?oldid=16703"
Community content is available under CC-BY-SA unless otherwise noted.